Wow I haven’t written a blog post in aaaages!! I’m very sorry to all of you who have been waiting patiently… it’s just been one thing after another!! Seeing as I’m so far behind I’ll do a few quick catch up posts and bring you all up to date and then, hopefully, keep things a little more prompt from now on in. I think the easiest way is with pictures, more than anything because I can’t actually remember where I’ve been or what I’ve done in any particular order without looking back through my camera, so picture heavy post coming up!

From Shepherd Sanctuary I had a long day into, yet again, headwinds. I also rode along what felt like the most dangerous road yet and goodness me it was a stressful few hours. The road itself wasn’t actually all that bad but for some inexplicable reason everyone was in a ridiculous rush and seemed totally unwilling to pass me with any space at all and multiple times I had to swerve off the road into the grass verge. In fact, by the end, as I saw cars approach in my mirror I was signalling for them to move the ‘eck over and not run me over thank you very much. I can only think there was some Texan emergency on the other side of town… perhaps a new BBQ restaurant had opened or a prize winning Longhorn had escaped (that’s a bull by the way not a Harry Potter dragon!)? I ended up getting so stressed out with the riding that I called it a day early and found a camping ground much sooner than I had been planning. Nothing much interesting happened that evening other than a nice chat with the camp host and yet another failed attempt at using my camera’s self timer… 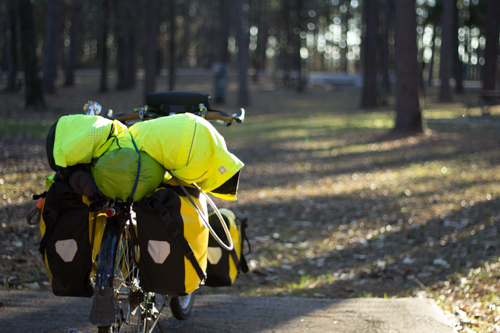 I’m much better at taking photos of my bike!

My early finish left me with a really short ride the next day. I suppose I should have gone further really but I had wanted to stay at a particular camping ground that I had heard about and it was only 20 miles down the road. I opted, as per usual, for the easy option and cruised the short ride to the camp… the Check Point. I was pleased I did as the couple who ran it were super friendly and the site was really nice. I actually ended up sleeping in the kitchen on my mat on the floor as it was pretty chilly in my tent and I couldn’t resist setting up my sleeping mat right next to the heater!!

The middle door leads to the small kitchen/my bedroom!

What’s the red string you may ask…?

Imagination is needed when pitching on decking!

I love the windmills, they are everywhere in Texas! Just like the movies! 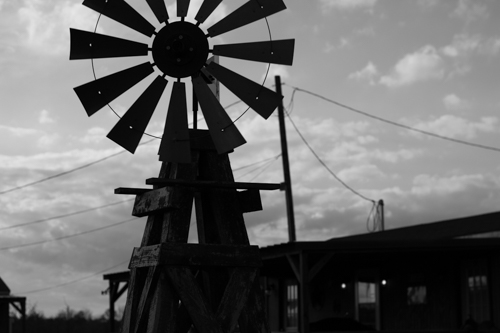 The next morning I was up nice and early partly because I knew that I had a longer day ahead and partly because I was worried someone was going to come in to make their breakfast and find me asleep in front of the sink! I was heading to stay with a lady who is something of a legend along the southern tier route. Her name is Carol, she is in her 70’s and over the past decade she has hosted over 600 bike tourers. In fact, she has converted her barn into a bunkhouse specifically for cyclists! It’s incredible and I can honest say that Carol is one of the most genuinely kind and generous people I have met so far. In fact I found her to be rather inspirational. 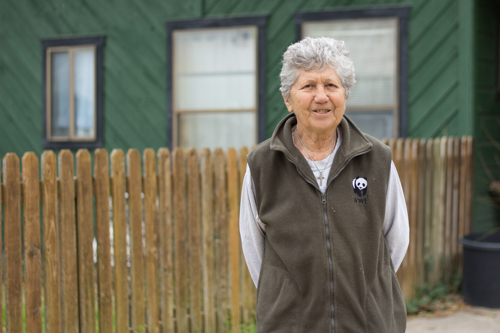 The bunkhouse balcony with beautiful views over the countryside.

From one inspirational person to two, the next day I bumped into some pretty amazing bike tourers. Will and Ruth from London have been on the road for 18 months and have cycled all over South America, up through Central America and now across the USA. Talking to them on the road side for a few minutes I started to think perhaps I should change my route and head South! I was sad that we were not to be cycling the same direction for a while (and in fact we just missed each other at Carol’s by 1x night) although I suspect they would have been no more than specs on the horizon after a few minutes… these guys cycled the Andes for goodness sake!!

Will & Ruth – real long distance cyclists putting me to shame!

Waving goodbye to Will and Ruth I wobbled off towards Austin in the drizzle.

A grey day in Texas enroute to Austin

4 thoughts on “Out of date in the lone star state!”

There was an error retrieving images from Instagram. An attempt will be remade in a few minutes.