Whoo Hooo, I have friends! Well I have friends for the time being at least, that is until Zach and Bryce realise that I’m really slow at riding my bike. For some unfathomable reason they both seem to think that I’m going to be a bit of a speed demon on the road (have they seen how much stuff I am carrying!) so they will have a bit of a shock in store over the next few days when they realise that that if they want to reach California before 2016 riding with me may not be the best option!

I suppose before carrying on I should introduce you all properly; meet Zach and Bryce Cueto and the cute Cisco. They are from Jacksonville, Florida and at 19 and 20 they make me feel old although Cisco compensates, at 11 years he’s an old man! They left home just a few weeks after me and I suspect we have been close to each other for much of the journey so far just without knowing it. Unlike myself, they are riding for a very unselfish reason… to increase awareness of the rare blood disorder Aplastic Anemia from which their younger sister, Marcela, is recovering.

Aplastic Anemia results from the inability of stem cells within the bone marrow to develop into a sufficient number of mature blood cells. It’s a rare condition and fatal if left untreated although I’m delighted to say that Marcela is currently in remission.

The boys planned to head west for a few days before picking up a ride to El Paso so we decided to share the road for a bit. Perhaps as a sign of things to come we had stopped within 10 miles to check out a pretty spot along the river at the Ingram dam.

It might not have been icy anymore but it wasn’t exactly a summers day!

On Fred and Janice’s wall we had seen photos of people flying down the dam wall like a slide. “We want to go there” we had exclaimed upon seeing people frolicking in the turquoise water! Well it turned out the water wasn’t quite so appealing in the cold and rain but not one to be defeated Zach decided to give it a shot anyway. Egged on by Bryce and myself, who really just wanted a cheap laugh, Zach braved the cold (and more worryingly the very rough concrete dam surface!) and slid… or I suppose I should say bum shuffled… his way into the freezing water!

Why wouldn’t you like to slide down that bumpy concrete dam wall into icy water eh Zach? 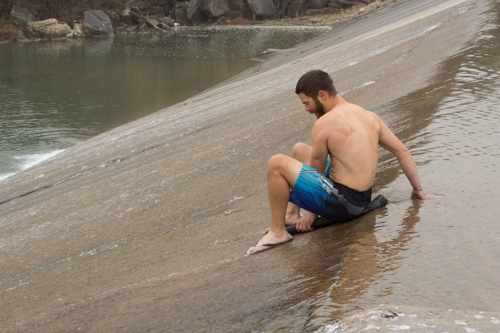 An old inner tube will make for a great slide seat right…?! 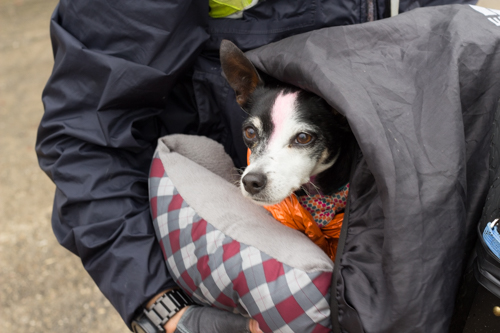 Cisco had the right idea, tucked up in his bed on the back of Bryce’s bike.

Drying off we got moving again fairly quickly to warm Zach up whilst I did my best to hide the fact that I am the slowest cyclist in the world for the next 30 odd miles to Lost Maple State Park. A huge downhill over our last few miles helped considerably and had us all whooping and screaming, quickly forgetting about the cold! It’s amazing what a good downhill can do! 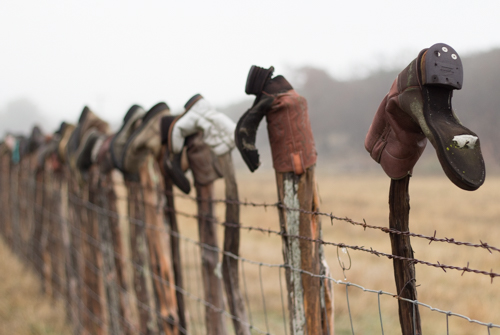 We passed this unique fence along the way which was actually kind of creepy!

Camping out behind an abandoned house (legitimately I might add) in the State Park we devoured three saucepans of mashed potato and the first of many jars of nutella! It was a cold, wet night and I didn’t get the best of sleeps – not ideal when considering our challenge the next morning. Fred had warned us of a hill called the “Big Mama” which was just one of three significant climbs we had to tackle that day. I suspected the boys’ misconception of my speed as a cyclist was soon be abruptly shattered! 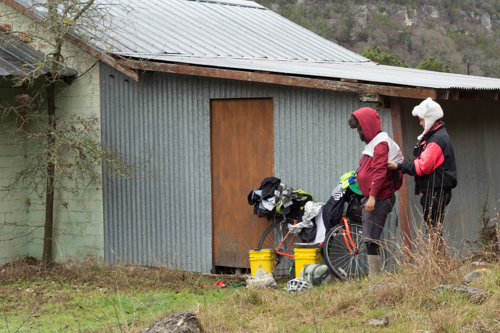 Getting packed up for a wet days riding. Bin liners make for good waterproofs.

Luckily, despite the rainy start the weather actually dried up a little though the clouds stuck with us. I suspect we missed out on some pretty views but the mist made for quite an atmospheric ride as we puffed our way up the hills.

Bryce looking impressively fresh at the top of one of the climbs. 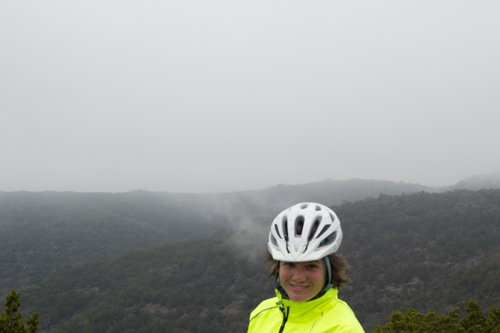 Bryce has a talent for composition it seems! It’s almost like I used the self timer!

During the day we stumbled across this cute place…

I wanted to duck the fence to get some better close ups but I’m too scared to duck fences in a country that loves it’s guns as much as America!

Arriving into the small town of Camp Wood that afternoon we set about looking for somewhere to sleep.  In a town of just 500 people everyone seemed to know everyone so after asking at at the corner shop we ended up with the store owner on the phone to the mayor to check if we could sleep in the town park. Permission was granted and we set up camp in the pavilion with a very conveniently placed liquor store on one side of the street and a family dollar (with toilets and a water fountain) on the other! Just dandy! I might point out that my alcohol consumption has increased considerably since meeting Zach and Bryce… I’d had been having the odd glass of wine here and there along the road but now I was seemingly drinking every evening! Although the boys may contest it I’m laying the blame at their door!

Zach & Bryce setting up their hammocks under the pavilion. I of course managed to set my tent up on the lone section of concrete that got wet during the rain that evening… well done me!

Packing up. Bryce later told me that he’d been posing for this photo for ages hoping I’d catch him shaking his space blanket out… I’m still not quite sure why that was desirable!

Getting Cisco wrapped up. With his doggy space man suit and space blanket Bryce then put him down the arm of his jacket so just his face stuck out the sleeve! We may have been shivering but the pup was toasty!

The next few days riding were fairly uneventful other than enjoying the company of my new pals so I’ll take you through to Del Rio with a few photos.

“What you mean don’t want to slide down this one Zach? Why ever not?!” 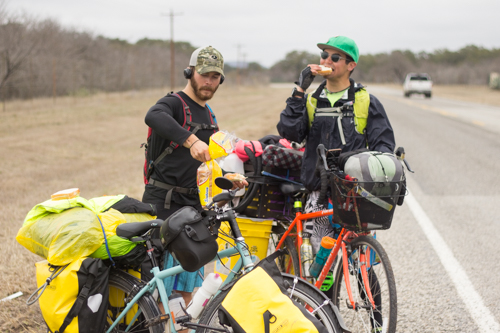 I have a million photos of these two eating!! Each time we stop they are on it before I’ve gotten my camera out of it’s case! I eat like a sparrow in comparision! 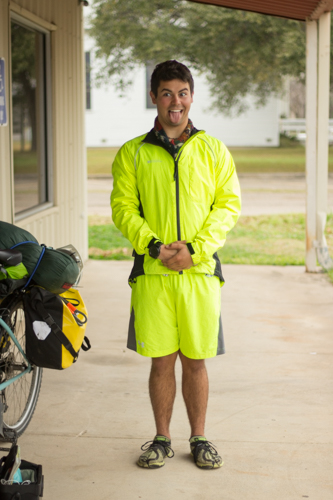 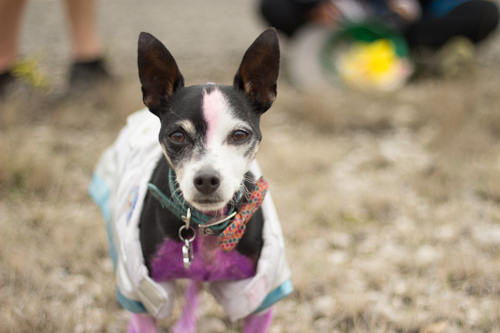 Zach perfectly demonstrating why women live longer than men. Hands free biking down the road with no helmet next to a semi-truck… yeah… that’ll do it!

Included to show what a mess we make of every motel room we stay in! I also happen to be standing where Bryce smashed a 2 litre bottle of wine an hour earlier!

Kerrville to Del Rio: 1st – 4th Mar 2015
Total so far – I’m afraid I can’t tell you these days… my speedo has conked out! I’m not sure that it really matters though anymore to be honest – it’s been a long way!

6 thoughts on “And then there were four….”