After our night on the interstate we were up and back on the road in (fairly!) prompt time! As you may have guessed by the title of this post, since hitting the desert in western Texas the thorns (or “stickers”) had been getting worse and worse. I, extremely smugly, was yet to get a flat but with thinner tyres and weaker tubes the boys had been getting plenty, Zach in particular. The next day was no exception and with the thorns truly out to get us we limped into Van Horn late and frustrated. My days of gloating soon came back to bite me when pulling into a gas station forecourt I felt my own back tyre go. NOOO! A very unrealistic part of me had been hoping to make it to Cali with no flats! Alas, it was not to be!

Unloading all my gear and sifting through my tool kit I set about trying to remember how to change the tube! Other than being totally unable to get the tyre back onto the rim I actually managed pretty well so essentially as long as I have someone with strong thumbs accompanying me throughout the remainder of the trip I’m perfectly capable of fixing my own bike!! If all else fails I’ll just have to rely on good old sexism to see me though… damsel in distress with a flat tyre – no problem!

Feeling deflated (pun not intended!) and done for the day we set up at a local RV park and snuck Cisco into a nearby restaurant for dinner in time to witness a near full blown fight between the waitresses – it was all very dramatic and made for quite amusing dining entertainment! We even went back for breakfast in the hope of seeing round 2!

Tummies full (but sadly no fight!) we set off the next morning with over 150 miles to the next bike shop totally out of spare tubes for the boys’ bikes. It was time for me to make a decision… should further flats require them to hitch the rest of the way to El Paso should I join them to stay as a group or keep on the road to cycle as much of the journey as possible? I decided to let the day decide and resolved that should we have less than 100 miles to hitch I would come along otherwise I’d pedal on alone.

We had a great morning ride, the weather was nice, the winds were in our favour and the stickers seemed to be staying at bay. We even had a flat-free 5 miles stretch on an unpaved road where we were all sure at least one of us was going to come a cropper! Things were looking up. Until, of course, hisssssssss. This time it was Bryce – good one Bryce! And guess what the milage was… I had 102 miles to El Paso! Well, that was that, the day had decided indeed! The issue for the boys was that we were riding along a frontage road of the interstate. As such, not only was there almost zero traffic on our road but all the potential “lifts” were racing along at 70mph on the interstate with no safe area in which to stop and pick up two annoyed bikers. Getting a ride was not looking hopeful…

It was time for plan B and seeing as we were now only 17km from the small town of Sierra Blanca we decided to patch the tube and see how far we could make it. Up until this point the boys had not had much luck with patch kits but with one brand left to try the offending thorn was found, removed and the hole patched. With Bryce re-inflated we cautiously pedalled our way into town, holding our breath over every bump! Luckily the patch made it and after all the delays we decided to have our last evening together at the RV park in town before I rode to El Paso and the boys tried to find a ride the following morning. 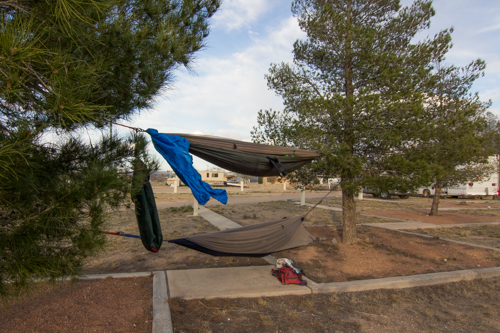 I’m not sure if I’ve posted a photo of the boys’ set up yet… there is usually a single tarp over both hammocks should the weather look dodgy. Pretty cool huh!

I was feeling sad that I was soon to be alone again but I needn’t have worried, the universe decided it was time to intervene. As we sat around that evening we got chatting to some of our neighbours and by a stroke of luck it turned out that one of them was driving to El Paso the following morning! Suddenly things were looking up… with a lift directly from the RV park the boys would be able to take my bags leaving me with only the essentials and thus allow me to make a century at minimal weight (something I would struggle to do with my full gear) covering enough miles to continue riding together from El Paso. Smashing! Thanks Universe!

For the first time ever I did what everyone has been telling me to do and I packed up the evening before in order to get an early start. It was awesome riding without the weight and I flew through the first 70 miles hitting the outskirts of town by early afternoon. My route wound along the Mexican border through pecan groves and small towns. Some were looking pretty sorry for themselves with many buildings in disrepair and abandoned, a result I imagine of the interstate now flying along 500m to the north.

I suspect this place isn’t quite kitted out for trucks anymore sadly.

With the interstate now carrying all the traffic it’s not hard to understand how these little places went out of business. This is how I’ve always imagined route 66 to be… haven’t you seen Cars!! 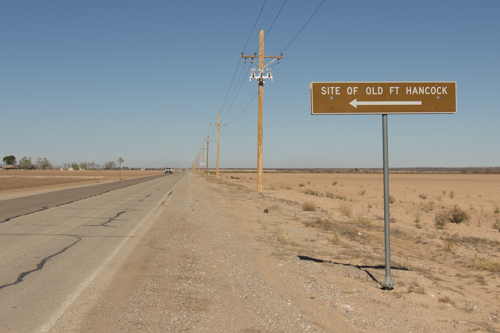 A historical site… this could be interesting… 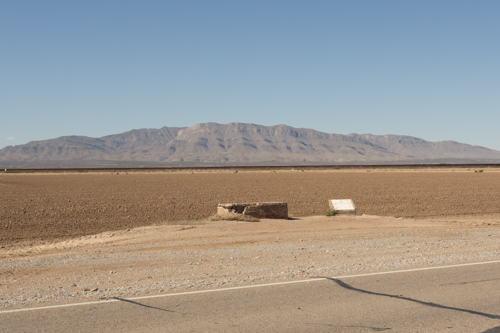 Oh… maybe not!!!! You can see the Mexican border in the background though at least!

As I approached the city I hung around outside MacDonalds pinching their free wifi whilst I contacted the boys to find out my address for the night. We were due to be staying with Ted, the friendly man who had picked us up back in Comstock when Zach’s spokes had popped and who had told us to contact him when we arrived in town. Not really sure what to expect and thinking we would likely be setting up camp in his yard I couldn’t believe it when I arrived to find that we had our own RV on his property, complete with bedroom, bathroom, kitchen and living room! It was amazing, we could hardly believe our luck! My first century was complete, my biggest day at 108miles, and now I had a huge double bed to myself in an RV! 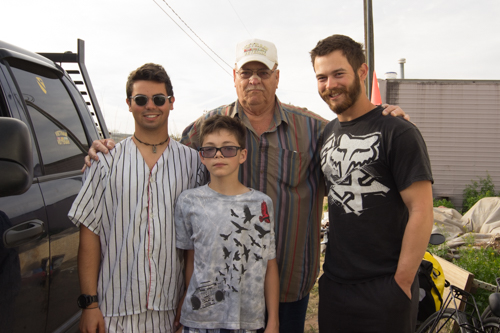 Bryce (in his pyjamas!), Isaiah, Ted and Zach

With such awesome lodgings and after my long day we were easily persuaded to stay for a second night and we spent the next day with John, Ted’s brother, who was kind enough to show us around the city. We visited the US Military base which was pretty cool as well as heading up to an awesome view point which looked out over the whole city and over into Mexico. 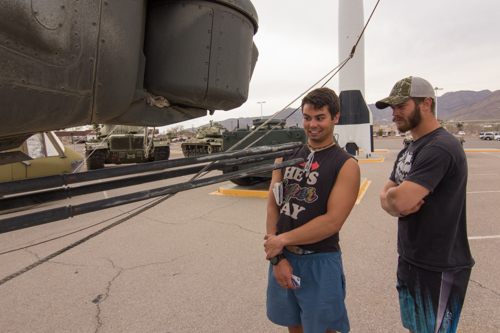 Vehicles on display outside the Military base

Poor Bryce… I spent the day making him do silly poses!

John, Bryce and Zach in front of a V2 rocket.

Looking down over America and Mexico… I can’t really remember where the border is but it’s somewhere in the middle of all those buildings!

The boys and John in front of our RV!

We had a great day off, my only disappointment being that after nearly 1000 miles of cycling through Texas, when it came to entering New Mexico, which I did a few miles before Ted’s place, the small country road was not deemed important enough for a state sign! I couldn’t believe it! I had taken a photo of every state sign thus far and now upon leaving Texas, the true biggie, I was denied my pic!

However as the blog is still out of date, something to which you are now all accustomed, I can conveniently remedy the lack of Texas/NM sign and show you instead the photo I took looking backward from Arizona to New Mexico a week later! 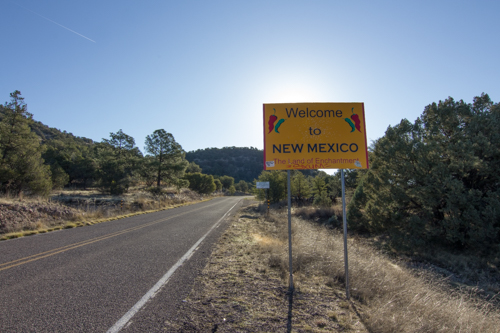 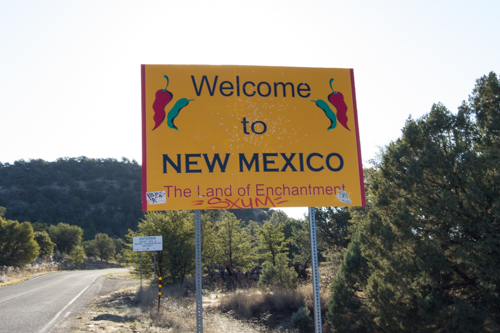 Upon closer inspection it seems not everyone likes New Mexico! I thought it was pretty cool but more of that in the next post!

Thanks Texas! It’s been a blast!