Dusting myself off the following morning I de-sanded as much as I could and packed up early before heading to Brawley where I planned to stop for some breakfast. In a final attempt to break my spirit the dunes presented me with one last challenge and within minutes of leaving I was desperately trying to manoeuvre my heavy bike through a barrier of ankle deep sand that now stood in the way of me and the main road. It was harder work crossing those 20 odd meters than the rest of the day’s cycle but cross it I did and with shoes full of sand the little blue bike and I were on the road again!

By the time I reached Brawley and devoured a huge breakfast I was shattered. Unsurprisingly I hadn’t slept well the night before and I felt as if I’d just rolled around on a beach with wet clothes on. Sand was trapped in the thread of my shorts and t-shirt, in my hair, under my finger nails and in between my toes and even my eyes felt gritty. I was in desperate need of a shower and sitting in the cafe I slowly lost all motivation to get back in the saddle.

Instead I decided to call it a day and found myself a nice spot with wifi to have a bit of an admin catch up. I messaged a warm showers host on the off chance that they might be available that evening but they were out of town so I ended up setting up camp in a local rv park. Feeling a million times better after a shower I cooked some dinner, read my book and slept like a log.

“Tori… Tori… Tori…” I thought I heard the following morning. “Who on earth can that be?”. Sleepily unzipping my tent I stuck my head out to find the friendly face of Bill, the warm showers host I had messaged the day before, grinning at me from his car! After getting back into town late and seeing my message he had tracked me down to ask if I would like breakfast before hitting the road! I was touched by his kindness and quickly accepted his offer. Packing up in record time I met him at a lovely local cafe (The Rock Cafe if anyone reading this should pass through Brawley!) where we enjoyed breakfast together. Bill was such a nice bloke and I left wishing that I had been able to spend the evening with him and his wife to get to know them more. Yet I had a schedule to keep so well fed and well caffeinated I got back on my bike in high spirits. I had heard that there was a corner shop just before my last big ascent of the trip where cyclists were permitted to camp overnight and I planned to spend the night there before tackling the climb in the morning. I was feeling a little apprehensive, not because of the increase in elevation but rather for the reputation the area had for extremely high winds which at this time of year nearly always came in from the West.

Even the motorists were warned…

Expecting a brutal day of climbing against the wind I set off early. Admittedly the road was fairly steep and unrelenting in it’s pitch but I got myself into a low gear and plodded along slowly. Higher and higher I climbed and, amazingly, the dreaded wind never arrived. In fact, take a look at the photo below and note which way my flag is blowing… 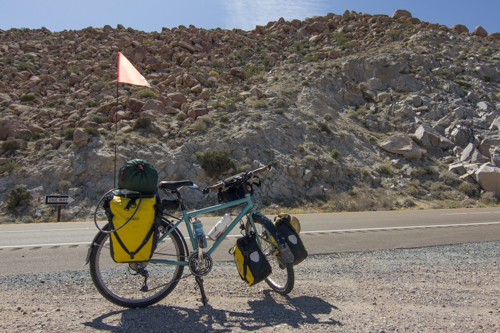 …yes my friends, I had a tailwind!! I couldn’t believe it!

It might not have been as bad as some previous climbs but it was hot nonetheless. 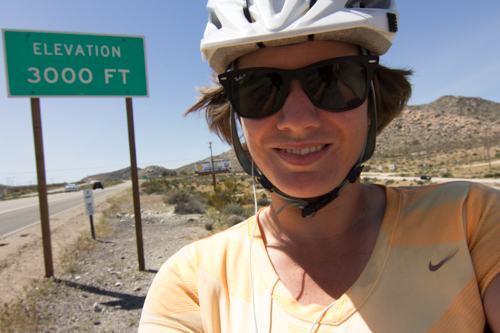 At least there were pretty flowers around and thus plenty of opportunities (excuses) to stop and take photos (a rest).

Eventually the road started to level out and I left the worst of the ascent behind me as my route veered to the south. I was, at times, within a few hundred meters of the Mexican border, the huge steel fence drawing that all important line in the sand that can be crossed so easily by some and so arduously by others.

Hang on a minute… a flaw in the plan: No green card? No worries. Who needs to go over when you can simply go around!

Stopping in Jacumba Resort, right on the border, for some lunch I got chatting to the lovely Ana and Brad sat on the table next to me. I hadn’t realised but the hotel was also a hot springs resort and on their way out they extremely kindly offered to treat me to an afternoon’s use of the hot spring facilities. Although I’d only biked around 15 miles that morning it had all been relentlessly uphill and I gladly accepted their offer. What’s more, I was delighted to find out that the resort also allowed camping in their back yard for only 10 bucks! My afternoon was thus spent quite unexpectedly relaxing in the hot springs and sunbathing by the pool! A perfect example of how you never know quite what’s going to happen each day on a bike tour. It was hard to remember that only 72 hours ago I had been in the middle of a sand storm in the desert!

With the main climb behind me and less than 70 miles to go to San Diego I hit the road the next morning feeling excited. I planned to spend one last night inland before arriving in the city as, somehow or another, I was ahead of schedule and Mum and Dad were not due to arrive for a few more days. Upon reaching Pine Valley I got chatting to the amazing Marji at a local coffee shop and whilst asking her about potential camping options in the area she kindly offered up her back yard. It was my second to last night of the trip and here I was with a safe place to sleep only as a result of the kindness of a stranger just as I had been on my second night back in Florida at Brad and Sherry’s. I thought over the last few months and the amazing people I had been lucky enough to meet and felt extremely fortunate. Well, fortunate and also slightly alarmed when I realised just quite how many thank you cards I would soon have to send! 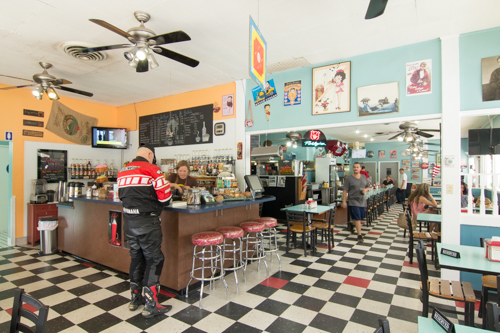 Marji doing her thing at work.

Marji, Joe and little Lou who couldn’t be less interested in posing for my photo! Yet while photos may not be his thing it seems cycling is; as I was setting off he very sweetly announced his plans to join me on the ride to the beach promptly getting his little tricycle out of the garage and pedalling off down the driveway after me! Bless him!

After a quick chat with Mom, Lou realised that leaving home on Easter Sunday would significantly reduce any easter egg hunting opportunities and so as quickly as it was taken out the tricycle was put away again… apparently sticking around for candy was a much better option than biking 60 miles to the beach with me – fair enough!

Waving the lovely family goodbye I set off and cruised down the 3000ft I had spent 2 days riding up until, before I knew it, I was approaching San Diego. My American journey was nearing it’s conclusion…