Aaaaaand we’re back! Goodness me I haven’t posted in weeks! I’m very sorry about that! So much has been going on and I’ve been camping nearly every night so decent wifi has been hard to come by. I’ll catch you all up over the next couple of days and then hopefully get back to regular (or at least semi regular) posts!

For now then, back to San Diego…

So although it may be some time before I am able to cross America again on my bicycle I did have one last road trip on the cards before I was to fly to Asia. Having met Mum, Dad and Alex in San Diego we now had 8 days to drive up to San Francisco from where were would all depart. It was a Bush road trip (missing one little blond Bush of course).

This little blond Bush to be precise. I wonder how much trouble I’ll be in for selecting this particular photo… I am only doing so safe in the knowledge that we are on opposite sides of the world!!!!

So then, having de-champagned we spent the morning exploring Ocean Beach, my arrival at the coast still slowly sinking in.

The imaginatively named Ocean Beach! An ocean and a beach no less! 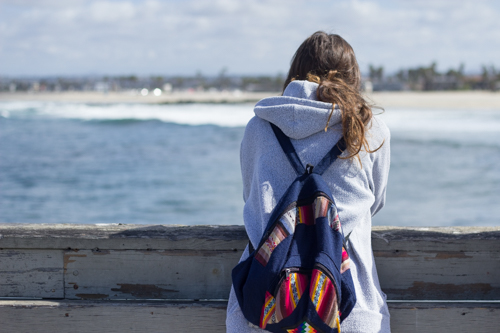 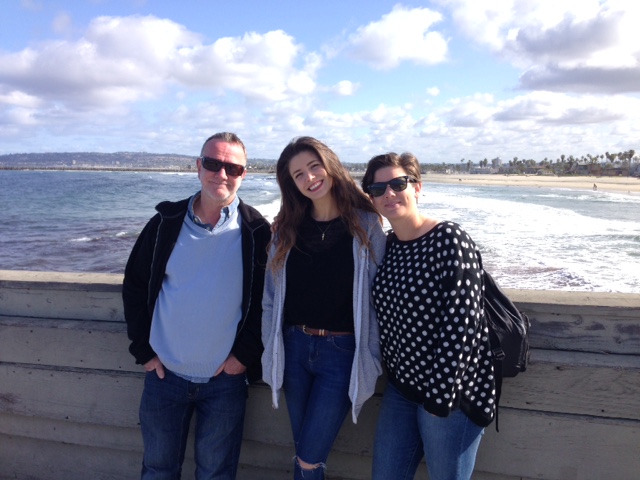 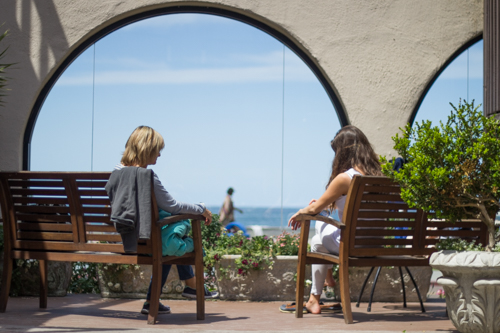 Our hotel right on the beach. 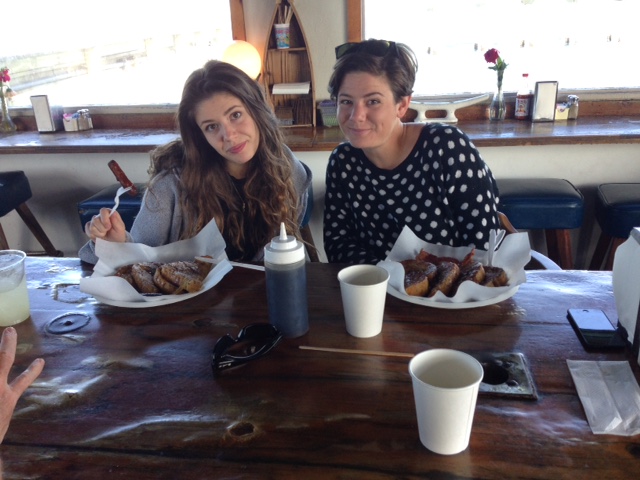 Sister Bush is introduced to French toast and maple syrup!

Wandering around Ocean Beach in the sunshine.

Now this is how I should have crossed the country!

Sticker galor featuring the tattoo sensation of the 00’s … the nautical star! Come on, we all know you’ve got one under that watch! 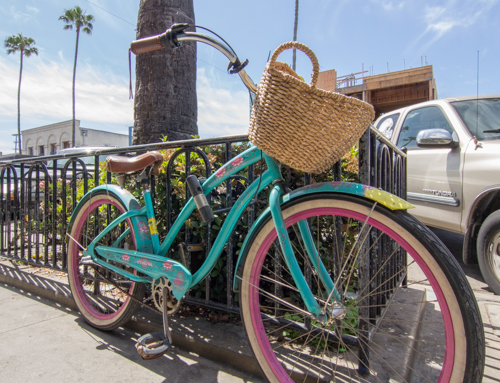 We’re in San Diego – how exciting!

In true Ness Bush style we had a schedule to keep so after our morning stroll we set off for the port and our afternoon activity, whale watching! After much faffing around from Alex and I taking photos we ended up in a mad rush to get there and we rocked up just in the nick of time to set off out of the bay into the ocean.

Dad, by far the most enthusiastic “spotter” on the tour boat spent hours with his eyes trained on the horizon searching for the tell tale white blowhole spray that indicates a passing whale. Sadly for him 3 hours of peering over the port side of the boat proved to be totally fruitless and the captain evenutally announced the presence of a fin whale off the starboard side! Looking a bit cross Dad dashed across the boat and was still one of the last to see the blowhole spray! Hilariously on the way back to the port he then quite unexpectedly proceeded to point excitedly to the water exclaiming “THERE’S SOMETHING”!! Unfortunately, with everyone’s attention thus caught “something” turned out to be a floating strand of kelp!! Not quite the spot he had hoped for I suspect!! 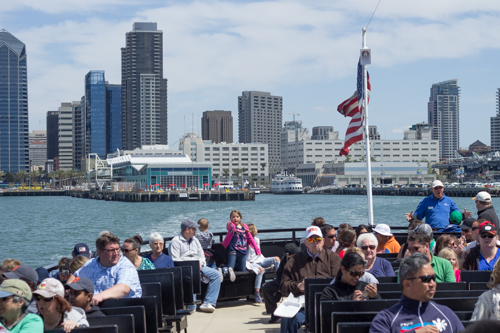 Five points for anyone who can spot the whale!

Ok so I’ll admit, I actually have no idea if there is a whale in this photo although I strongly suspect that there is not. Sorry about that. At least now you have some idea of what the trip was like for Dad! 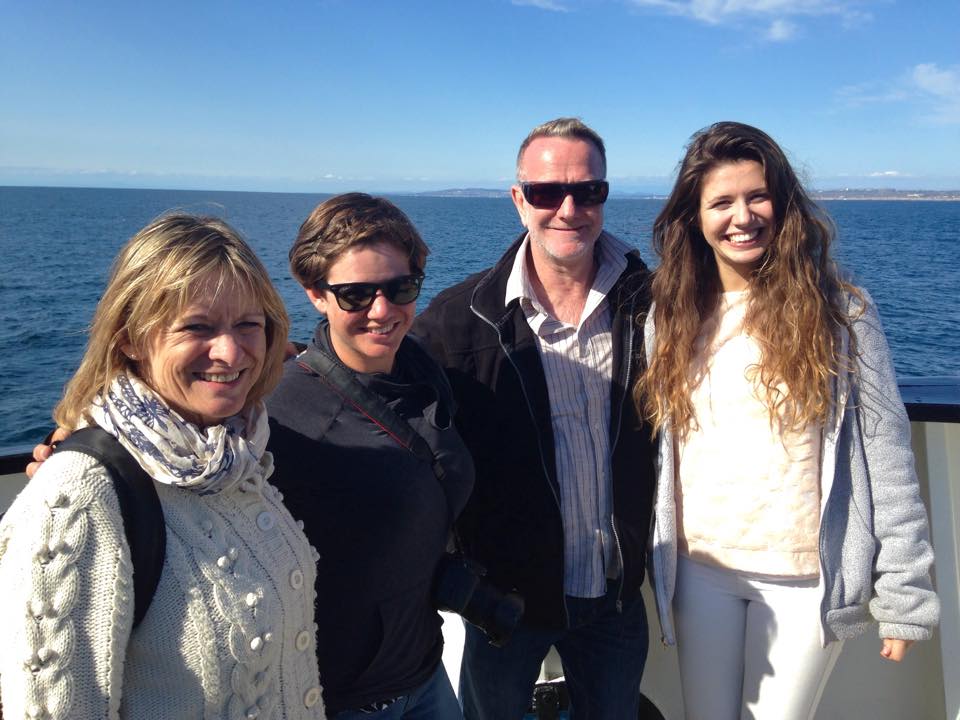 The more observant of you may also have noticed from the photo above that my hair has changed from what was essentially a totally bonkers overgrown mop looking like this: 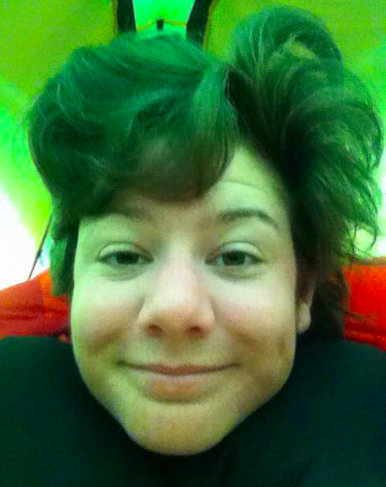 into… well as my sister so kindly pointed out, into this… 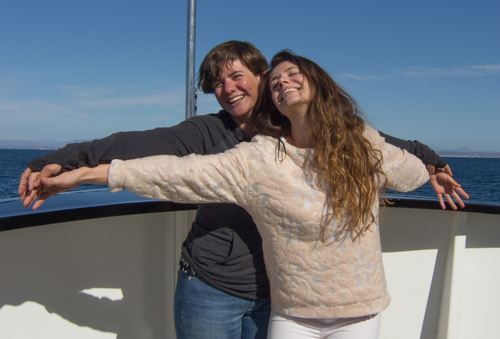 Rose getting a bit chilly on the way back into the bay.

The San Diego skyline with the mountains I crossed a few days before in the background.

I couldn’t resist sneaking a photo of this snazztastic combo – pretty special I think you’ll agree!

Heading back to the hotel we settled down with a bottle of wine and 3 months after Dad and I had watched the sun emerge from the Atlantic Ocean we  sipped our wine and watched it slowly sink into the Pacific. 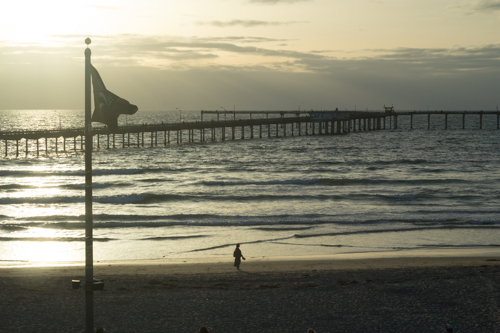 Mum proving herself as the competent photographer she is!

The next morning we jumped into our rental car which was, in true American style, larger than my bedroom at home and headed north where we were due to stay with some old family friends in Santa Monica. After the obligatory drive around Beverly Hills where we, along with the other tourists, gawked at the ridiculously posh houses (and ridiculously tall palm trees) we headed to the lovely Romero’s for an evening of food, wine, table tennis and magic!

Delicious enough to keep Copper’s attention for the evening!

And of course it didn’t take long for Dad to get his magic on and impress everyone with his classic matchstick trick… (anyone who has met my Dad will be nodding knowingly at this point!). 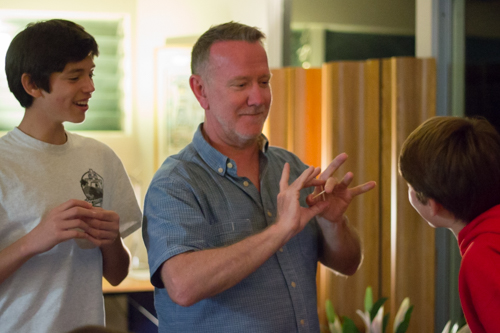 I’ve been watching him do it for 25 years but even now, it really is a good’n! Toby and Leo were suitably impressed! 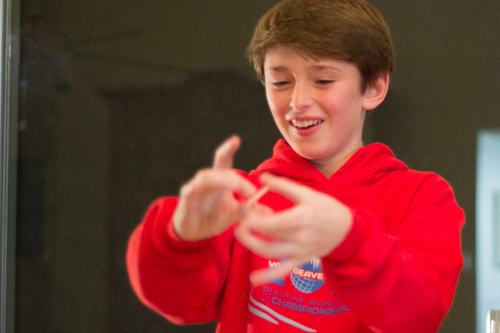 Everyone gave it a go… 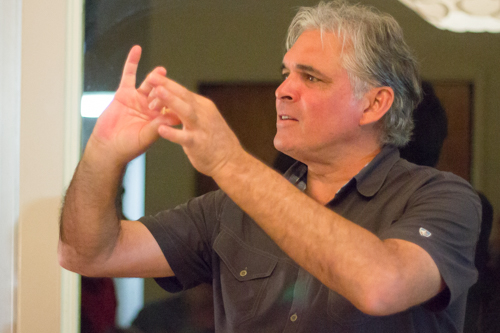 With confidence and flare… 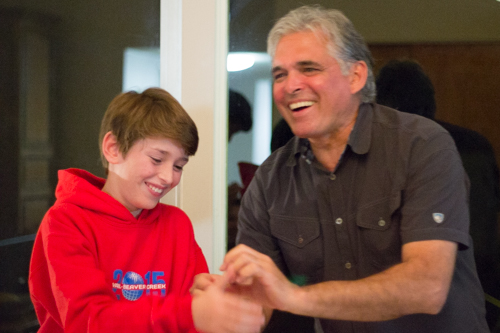 …but not necessarily success!

The lovely clay trinkets and bowls that Leo makes. What a creative one he is! (Just had to un-typo bowls from bowels! Alan you’d have liked that one!) 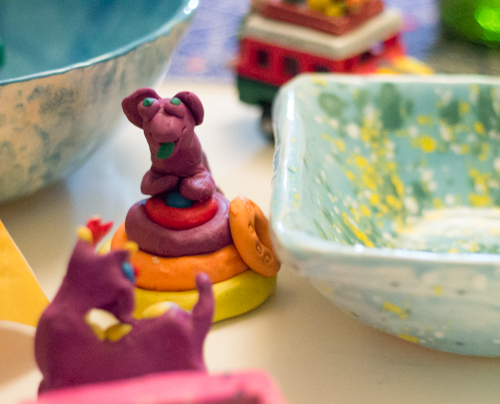 Cute animals and beautiful crockery. We were privileged enough to be given one each as a treasured gift at the end of the evening. Of course we all cried… this is the Bush family after all!! Thank you Leo!!!!!

The following morning, wishing we were able to stay for longer we set off as we must and spent the morning at the wonderful Getty Museum. It was fantastic and I would totally recommend it to anyone heading to LA. The architecture was brilliant, the garden superb, the exhibitions fabulous and of course, being California, the weather perfect!

I spent much of the day taking photos looking up which doesn’t lead to particularly novel or inspired photos but rather a vastly increased chance of walking into things! 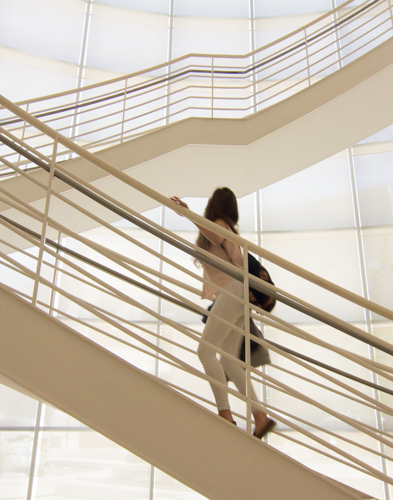 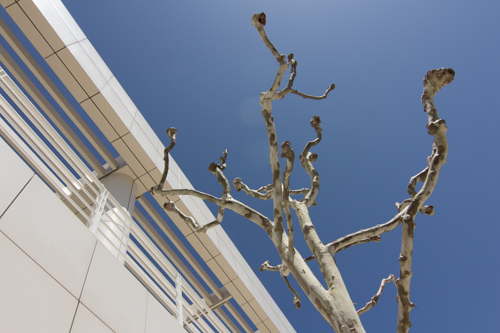 One of the few on a horizontal plane!

The wonderful Turner exhibition that we had actually already seen at the Tate last year but enjoyed again none-the-less. 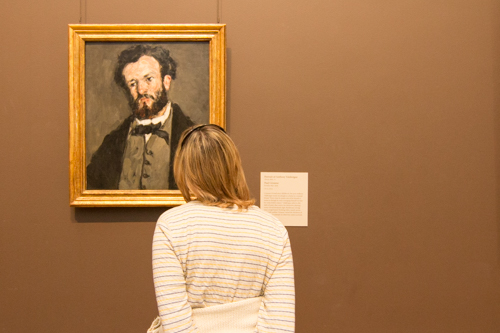 Not Turner obviously but we weren’t allowed to take photos in there so you’ll have to make to with Cezanne instead. 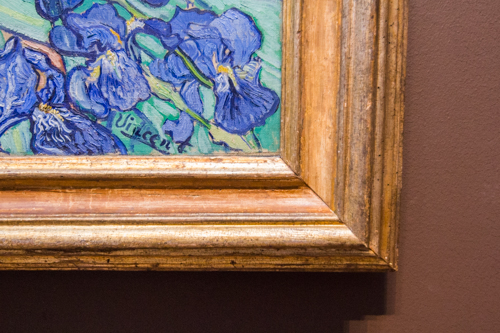 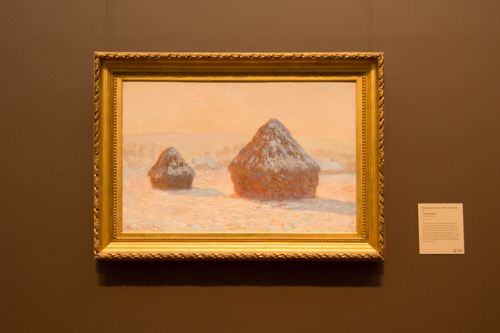 Or Monet… I love this painting. Not bad alternatives really. 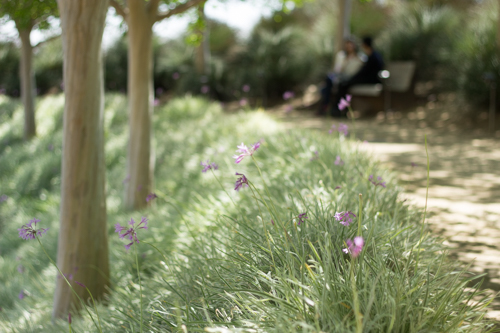 Strolling around the garden

This cheeky chap was busy darting around the foliage but stayed still for just long enough for me to snap him. I’d never seen a hummingbird before and was staggered at how tiny he was, barely the length of my thumb but perfect and beautiful.

After a wonderful morning it was time to get back into the white beast aka our rental car. We were going to Santa Barbara. A few years ago (the exact number of which I wouldn’t dare disclose) my Nan and Grandpa travelled up the west coast of America and a visit to Santa Barbara was my Nan’s one and only request. After a series of unexpected events involving a camper van full off wine, and some lost friends, Santa Barbara was bypassed and so my poor Nan sadly missed the main place that she had wanted to see! Now a number of decades on we were going to go on her behalf. She might not get to visit in person but boy will she be receiving a good post card! 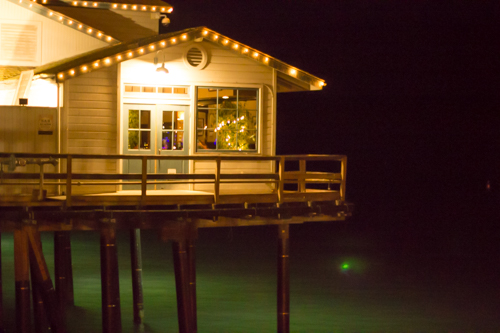 An evening stroll to the end of the pier which, of course, you can drive your car down. One couldn’t possibly be expected to walk to the end right… this is America!!

I had intended for this to be one post but it turns out that I’ve written more and included way more photos than I had planned! With Ness Bush’s rigorous scheduling it’s hardly surprising there’s lots to say I guess so I’m going to leave you with our lunch spot, San Luis Obispo’s, biggest attraction… the chewing gum wall… kind of cool if you can get past the fact it is truly gross! 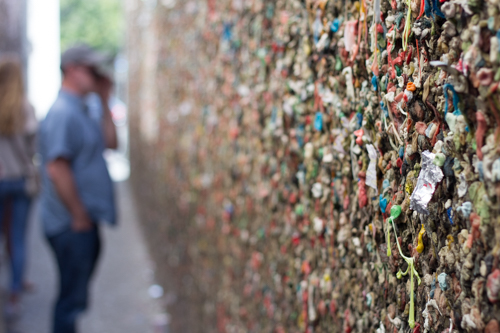 Nothing says I love you like an old dried up piece of chewing gum right..

8 thoughts on “Life in the fast lane”