Moving west from Ijen the rest of my time in Indonesia was spent on Java. I was heading towards Jakarta where I knew I could catch a ferry to Singapore. Since flying to Bali from Seoul I hoped to complete the rest of my trip by bike or ferry taking no further flights.

Java is a beautiful place and the outstanding views made the numerous and often challenging hills well worth the effort. Continual volcanic activity has left the land incredibly fertile and when combined with the differing conditions across multiple elevations the variety of crops cultivated is astonishing. I rode through fields of coffee, tea, exotic fruits, sugar cane, rice, soy beans, corn and tobacco to name but a few.

Police stations became my regular port of call when it came to find somewhere to sleep and the police were without fail welcoming and hospitable. I slept everywhere from the station car park to the mosque storage cupboard and more often than not was sent on my way the following morning with food, drink and merry smiles 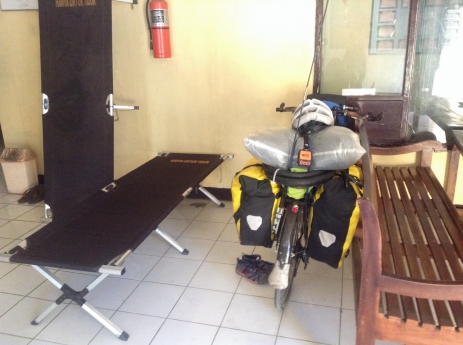 My morning as Beyonce… Beyonce on a bike I guess! Having been offered somewhere to pitch my tent by local school teacher Cecilia I was invited to come and say hi to her students the following morning. Perhaps I was the first bike tourer the kids had seen or perhaps they were just overly excitable but being stood in front of a playground full of screaming kids was my first (and I suspect only) taster of fame.

Once they had calmed down and the millionth photo had been taken of me surrounded by cheering kids I was audience to both a traditional Indonesian dance and their local school song. Ah how sweet you may think, as did I, until that is I was asked if I would reciprocate and perform a traditional English dance as well as sing an English song… with a microphone. Before I continue those of you who know me are very much aware of my singing talents but for the rest of you I feel it is only fair for said talents to be made public knowledge. The following video should do the job though I’ll apologise in advance for the nose picking, if you can’t pick you nose when you’re 2 then when can you…

So now you know and it is at this point that my similarity to Beyonce promptly comes to an end.

So what to do? It was looking worryingly like I was going to have to perform a solo rendition God Save the Queen whilst Morris Dancing but alas I was short of knee high socks and miniature bells. Instead I stood gormlessly for awhile ever so slightly panic stricken before embracing the inevitable and launching wholeheartedly into what I hoped would be an interactive rendition of Old MacDonald had a farm. Yet it turns out that chickens don’t “cluck” in Indonesia, instead they “cicit”, cats don’t “miaow” but apparently they “ngeong” and dogs don’t “woof” they “menggonggong”… obviously. Only the trusty cow has a cross cultural “moo”. This made for a slightly confusing sing song but stood on stage “ciciting” and “mengonggonging” I knew that this was an experience I was unlikely to repeat and it was brilliant.

Oh the life of Beyonce – being bombarded by school kids!

Everyone was involved whether they liked it or not

The lovely Cecilia and her family

Hanging out in the staff room post Old MacDonald

My wonderful guesthouse owner who spotted me a number of times during my ride up to the crater and proceeded to take it upon himself to be my guide the whole following day – and who then refused to accept any money for it. I very guiltily can’t remember his name however so for the purpose of this blog we’ll call him Bob, that classic Indonesian name. Thanks Bob, you’re a star!

A sunrise at Bromo is one of the top tourist attractions in Java and upon our arrival I was disheartened to find such a crowd. Luckily for me Bob had a knack for avoiding the crowds and we slipped through a fence and made our way to a trail below the viewpoint where the crowds disappeared

The other benefit of having Bob with me was that I finally had someone to take some photos of me for a change (there are only so many selfies that I can bring myself to cringingly take). Bob accepted the role of official photographer whole heartedly and with such enthusiasm that I was left chuckling to myself while obediently going along with his direction: “peace sign”, “point into the distance”, “look at the camera”, “gaze into the distance” etc etc and I think you’ll agree that the results are pretty spectacular… although in hindsight I wonder if I should have removed the motorbike helmet… 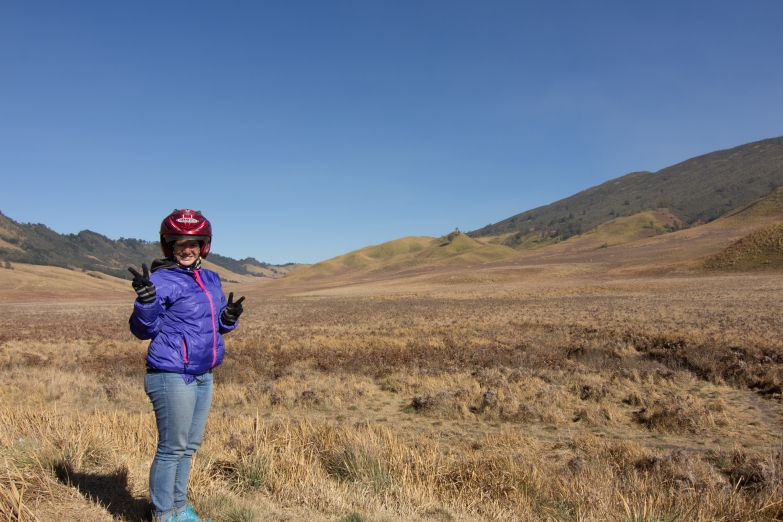 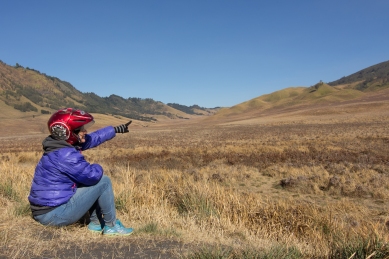 “Smile to the camera” 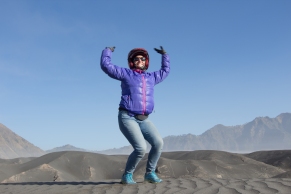 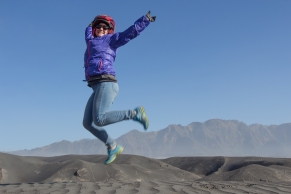 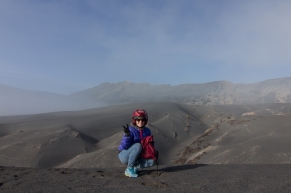 The scenery in the Tengger Caldera (the huge crater in which Bromo is located) was stunning and we left the hoards of tourists behind in their queues as we took a look around on Bob’s bike. All in all the day was one of my highlights of Indonesia

Leaving the volcanoes behind I headed west to the fun city of Yogyakarta and the beautiful temple complexes of Prambaman and Borobudur before heading north towards the traffic filled streets of Jakarta and my cockroach filled ferry to Singapore. 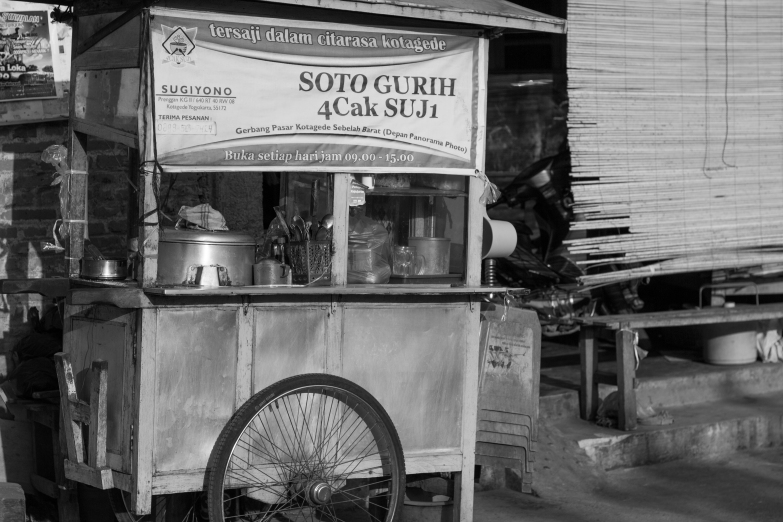 I found Indonesia to be a both friendly and welcoming country and the people mostly honest and well meaning. That’s not to say it was perfect. The amount of litter dumped throughout the otherwise beautiful countryside was by far the worst I have ever seen. Yet with the 4th highest population in the world (over 250 million) and huge practical and economic challenges hindering the development of an effective waste disposal/recycling system perhaps this is hardly surprising. I also had a few instances of unwanted attention from local men which although annoying ultimately didn’t escalate instead serving merely as learnt lessons. Finally, as with anywhere high on traveller’s hit lists, some parts of the country felt insincere and on occasion seedy although laying the blame for this totally at Indonesia’s door seems a more than a little unfair. I wonder if such insincerities should not lead us to judge the cultures we are visiting but instead serve as a reminder of our own flaws and the impact our behaviour has on those around us. The world may be a small place but it’s not so small for everyone and it can be easy to forget quite how privileged we are. A privilege that comes hand in hand with a responsibility to conduct ourselves both respectfully and conscientiously.

So on that note I’ll think I’ll leave you with some of the lovely people that welcomed me to Indonesia with genuine hospitality and kindness. Thumbs up chaps and thank you very much 🙂 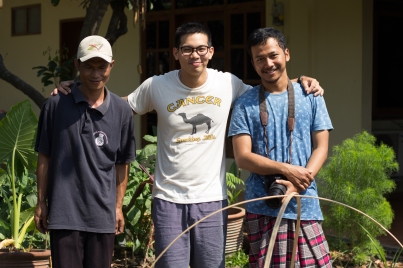 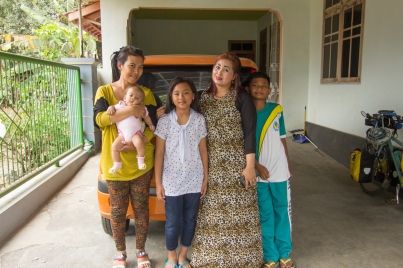 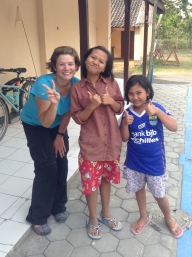 7 thoughts on “Indonesia – A photographic journey”